How To Use Watch As A Compass? (In Either Hemisphere) 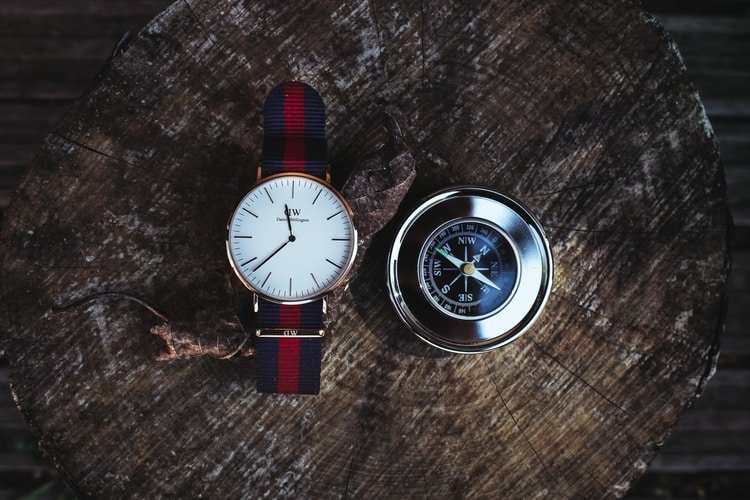 Wristwatches are pretty nifty gadgets. Sure, they tell time, but some also play music and videos or measure your heart rate and track your sleep patterns. Those features can be found on smartwatches, the latest evolutionary step in the timepiece that has been around for centuries. The simple wristwatch just keeps getting more advanced.
Yet, for all of those advances, one of the wristwatch’s most unheralded but useful features is perhaps it’s most low-tech. A watch can be a fantastically accurate compass, assuming it’s set accurately and analog (sorry digital watch fans). Sure, some watches include compasses, but you don’t need to pay extra for the feature if you know a certain technique.
Keep reading to find out how to use an analog watch as a compass.

Up until the early 1970s, essentially every wristwatch was analog. That is to say, all watches used an hour and minute hand combination to tell the time. The first digital watch was introduced in 1972 and cost thousands of dollars, but within a decade, digital watches were both exceedingly popular and ridiculously cheap.
This was in part because of the quartz revolution that almost brought down the mechanical watch industry of Switzerland.
The rise of quartz (battery-powered) watches and digital watches were so aligned, often people think of all quartz watches as being digital.
In fact, though, many analog watches are battery-powered. Read here why quartz watches are often considered more accurate than mechanical.
Now that we understand the distinction, let’s see how to use almost any analog watch as a compass.

Use a Watch as a Compass (Northern Hemisphere)


There we go again, making another distinction. Yes, it’s true, the following trick only works if you are somewhere in the Northern Hemisphere. Don’t worry, though, the trick can be tweaked for the Southern Hemisphere, which we’ll discuss momentarily.
While a traditional compass is manipulated by magnetic fields that draw the needle towards the north, using your watch as a compass relies on another force of nature: the sun.
If you find yourself in a situation where you are lost and don’t have a compass at your disposal, all you need is your trusty analog watch and the ability to see the sun (try not to look right at it).
Let’s go through what you need to do step by step.
There you have it, three easy steps and you can determine south. As long as you know that north is the opposite of south, you’re all set (if you can’t figure out east and west from there, you should probably just stay inside forever).
Of course, as easy as that sounds, it does rely on a few important details. First off, if it’s a cloudy day, finding the sun might be difficult. There’s not much you can do about that, but if there is even a sliver of sunlight, look for an object’s shadow. The shadow will point in the opposite direction of the sun (assuming no other light source). Also, this technique doesn’t work at night, so you’ll have to wait until dawn.
Now, determining the exact middle between the hour hand and the 12 marker sounds easy, but depending on the watch, that might be easier said than done. For instance, if your hour hand is pointing at 5, the middle would be halfway between 2 and 3. Not all watches have markers for every hour, though.
We would recommend getting a watch with a dial something like the Bulova Sea King Analog watch.
As you can see below, the watch not only has a marker for each hour but each minute as well. That’ll make determining an exact direction much easier.


Use a Watch as a Compass (Southern Hemisphere)

That’s all simple enough, but you’re going to have to adapt this technique a little if you happen to be in Australia or somewhere else in the Southern Hemisphere.
The steps aren’t much different, but they do involve a little adjustment.

There you have it. No fancy gadgets, no extra features. Just a simple technique that will allow you to find your way home if you get lost in the (sunny) woods.
Of course, this technique only works if your watch is accurate. If you wear one of those watches that is always losing time, you’ll end up walking off in the wrong direction. For that reason, you will probably want to go with a quartz watch over a mechanical watch (you can read why quartz is more accurate here).
We suggest that you consider the Longines Conquest V.H.P. (“very high precision”) which is a fitting name for one of the most accurate quartz watches on the market.

If doing geometry with the sun doesn’t appeal to you, you could always pick up a watch with a built-in compass. There are tons of options, and many are even digital. It’s hardly the most advanced feature you’ll find on a wristwatch, but it could end up being the one that saves your life.
For our taste, the Timex Intelligent Quartz Watch is great value for money.


This watch has a tide tracker that’s a useful watch feature for fishing or sailing and a thermometer, but of course, the reason we’re mentioning it is its compass. With a push of a button, a fourth hand turns to point north and will continue pointing north as the wearer moves.
It’s a more traditional style of a compass and you won’t have any problem using it on a stormy night.
We would never want you to be in a position to need a compass to survive, but if you do, we hope that you remember this technique (and that you have your favorite analog watch with you).
If you are often in a situation where you’ll need a compass, you probably don’t want to have to rely on this method.
For our full list of best compass watches see here.
If you’re looking for more feature-rich watches and love the outdoors – see these watch suggestions here or if you are a backcountry skier, take a look at these GPS watches, many of these have built-in compasses or are GPS enabled smartwatches.
Another thing to consider is that this simple method of using a watch doesn’t have a rotating bezel, index line, ruler, declination markings, or other features of a “real compass” that will help you with map reading, calculating bearing, etc. like you would have on a traditional compass.


How to Use A Compass


It sounds strange but even with a compass, some people still get lost in the woods because they don’t really know how to use the compass features to find their bearing and to stick to true north on the map vs magnetic north. Here is a 7 min video that gives a good explanation of how to use a compass effectively.