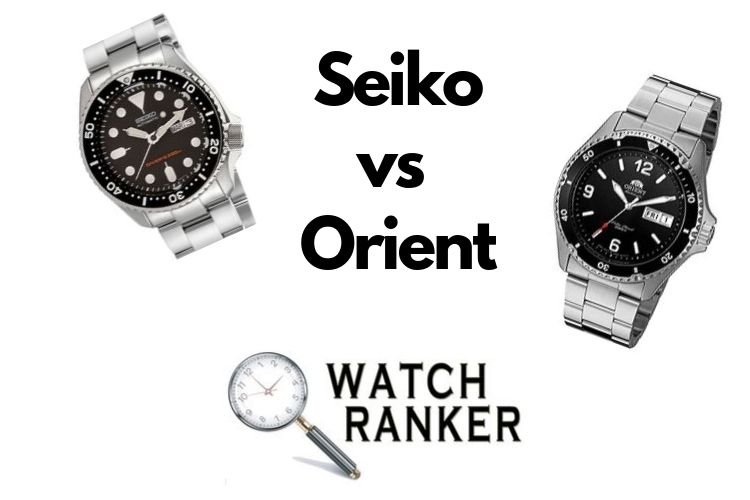 Seiko and Orient are two Japanese watchmakers, and both are well-known for their craftsmanship when it comes to creating quality timepieces. While Orient is now under the Seiko brand, they can still be considered separate entities as both operate independently.
While Seiko is well-respected for its in-house movements, Prospex dive watches, and the affordable Seiko 5 line of automatics, Orient is a tough competitor when it comes to their affordable “Bambino” line of automatic dress watches and “Mako” and “Ray” divers. Where Seiko excels and outranks Orient is with its premium watch line – Grand Seiko.
In this article, we will be discussing the critical differences between Seiko and Orient. We will also be comparing some of the best-selling watches from each brand.  But before we head on to the comparisons, let’s go through a  quick summary of both companies’ history and achievements.

Seiko began as a jewelry shop in Tokyo, Japan in 1881. It took at least ten years until Seiko first dipped their toes into the watchmaking industry with their Seikosha clocks. It wasn’t until 1924 when Seiko developed their wristwatches though.
If there is one thing that Seiko is known for, it is innovation. Seiko was the first company to introduce the revolutionary quartz movement watches in 1969. Their Aston watch series pretty much changed the landscape of the industry as it is the first wristwatch of its kind. The quartz movement provided the Astron watch with impeccable and high precision time-keeping,
Seiko once again changed the game with another revolutionary watch technology that they introduced in 1977, the solar power watch technology. This new tech pretty much gave Seiko’s line of watches indefinite operation time.
In 1999 Seiko showcased their patented Spring Drive movement. This new technology was designed explicitly for astronauts as it is constructed to withstand space travel while retaining its precision in time-keeping.
Even now, Seiko is continuously trying to be an innovator in the watchmaking industry.

Orient is another respected affordable Japanese watch company. Founded in 1901 by Shogoro Yoshida, Orient began as a wholesale shop specializing in time-keepers, and Orient was then known as the Yoshida Watch Shop and sold imported pocket watches.
Yoshida then expanded its repertoire by including wristwatches in its products in 1912. The Yoshida Watch Shop was then re-christened as the Toyo Tokein Manufacturing and started in-house table clocks and gauges. It was not until 1934 that the company began manufacturing its wristwatches.
Unfortunately, the company went through a rough patch and was forced to shut down in 1949. This was due to the Japanese economic collapse caused by the events and results of World War II. The company once again tried to revive itself a year later and was reintroduced as Tama Keiki Company. A year after that, they again changed their name to the Orient Watch Company.
Orient then began its steady climb back as one of the world’s premier watchmakers. The company showed continued growth in the following decades, and Orient has also found its niche as one of the most trusted diver watch manufacturers in the market.
In 2001, Orient became a subsidiary of the Seiko Watch Group. In 2009, Seiko absorbed Orient but still managed to retain its unique brand quality. To this day, Orient has proven itself to be one of the top watchmakers of diver timepieces.

Japanese watches are known for their craftsmanship, accuracy, and precision. This holds true with Seiko and Orient watches. We will be looking at some of their best products to see which one is the superior brand.

Seiko and Orient make some of the best dive watches on the market, especially when it comes to affordable dive watches.


The Seiko Chronograph Dive Watch is the perfect companion for divers who prefer a highly detailed watch to accompany them during water activities. The watch features a 43mm stainless steel case with a unidirectional bezel. The crown features a red stripe, an excellent complement to the black dial. Also, since this is a chronograph, it comes with three sub-dials.
This Seiko dive watch utilizes Japanese quartz movement with its analog display. Securing the watch is also quite simple thanks to its push-button clasp with buckle design.
Of course, this dive watch also comes with impressive water resistance for up to 660-feet (200m), giving it the level you’d expect for a profession-level dive watch.
The Seiko provides reliability, convenience, and the brand’s signature quality. The V175 Solar quartz movement makes it a very accurate and practical timepiece.


The Orient Mako II is among Orient’s flagship dive watch models. The watch itself is pretty basic and focuses more on delivering the functionality one would expect from this type of watch. It is also reasonably priced, which is the reason why this Japanese dive watch is quite sought after.
The Mako II is relatively sleeker compared to Seiko as mentioned above with a 41mm in diameter case. The case comes with a 120-click unidirectional bezel. The Mako II also uses their patented Cal. F6922 movement technology.
As for features, the Mako II comes with hand winds, hacks, and improved luminosity in low-light environments. Regarding the dial, the Mako II only displays the 6, 9 and 12, which helps reduce the clutter appearance.
In regards to its water resistance, the Mako II can withstand around 660-feet and is suitable for most water activities except for scuba diving. Overall, the Orient Mako II is an excellent choice for those looking for a mid-range dive watch. The larger 44mm Orient Men’s ‘Mako XL’ made our list of best dive watches under $500 (spoiler– other Orient and Seiko models also made the list)
Dive Watches –  Both Seiko and Orient provide some top-quality dive watches, but the nod will need to be given to Seiko. Orient specializes in mid-range watches, and their dive watches are certainly one of the best in this category. However, Seiko offers a more expansive selection of dive watches covering every facet needed.

Chronograph watches provide an improved range of functionalities for individuals who want their timepieces to offer more than just the time. Seiko is a brand that has a solid reputation when it comes to reliability and functionality. So, how does Orient compare?


Priced under $500, this is watch showcases Seiko’s signature quality without breaking your bank account.
This watch features a 40mm stainless steel case attached to a stainless-steel bracelet. The face dial is primarily black while the markers and hands are all gray, with the second hand getting the red color treatment, giving it improved legibility. It is well-made and is sure to last for quite a long time.
Of course, since Seiko makes this, the watch uses the always reliable quartz movement technology with impeccably high accuracy. The watch is also designed to be water-resistant for up 330-feet.
It comes with three sub-dials, all designed to be easily read and distinguishable. Overall, this is one of Seiko’s most elegant chronograph watches from their mid-range collection.


The Orient Star Retrograde accomplishes a feat that is quite rare in chronograph watches, and that is with its neat and sleek appearance. Chronograph watches are known for being bulky and, in some cases, having a cluttered appearance. This is not the case with the Orient Star Retrograde watch.
You can even place this watch into the dress watch category as well.  As for performance, the Retrograde features the Caliber 40150 movement, which can hand-wind, hack and provide up to 40-hours of power reserve.
It comes with three sub-dials that display the date and day, plus a power reserve meter. This is a highly polished watch that showcases Orient’s unique craftsmanship. With its sleek 39.5mm case diameter, it can easily double as your “go-to” dress watch for special occasions. It also has a nifty transparent back case to show you the intricate inner workings of this watch.
The watch also incorporates scratch-resistant sapphire crystal. This is a real work of art and will be a lovely addition to your watch collection.
Chronograph Watch – Again, we will be giving the win to Seiko. While Orient certainly has quite a beauty with its Retrograde watch, Seiko manages to provide a more cohesive balance between quality, functionality, and style. The Retrograde is a fantastic-looking watch, though, no doubt about that.

Conclusion: Seiko and Orient – Which Watch is Better?

All in all, this is quite a close call and not as clear-cut as you would think. While Orient has been under the Seiko brand for quite some time, they still retained their unique qualities. Orient is a well-known watch brand, it Bambino collection is one of the top-selling affordable dress watch collections, and its affordable dive watches like the Mako and Kamasu lines.
Seiko is undoubtedly a more well-rounded option with such a broad collection from its dive, dress and sports watches. Whether it’s Prospex PADI watches, Presage line of dress watches or Seiko 5 sports watches – Seiko is one of the top affordable brands.
However, Orient and Seiko do compete directly in many ways – when it comes down to it, much of it comes down to taste and budget. On price, Orient generally beats out Seiko so many budget shoppers are attracted to the brand whereas serious dive watch fans would be willing to spend extra for a Seiko.
Still unsure? Check out our list of Best Seiko Watches here or our list of Best Orient Watches.